Civil disobedience is doing an activity which is illegal because you believe the law to be unjust. For example a black person sitting in a white-only bus seat, or a person protesting when protest is banned. Miranda and I took to the streets of Paris to march for love of humanity and our planet in defiance of the protest ban.

During the first twenty minutes of the walk I was on the phone to Radio Woking and you will be able to listen to the interview online soon. Along the route of the march we saw the length of the human chain and had a range of responses, mostly very positive.

A brass band also later led a group of people into the streets to march. The police initially kept pushing us off the road and we kept returning but after a certain point they decided to leave us to it and we were able to complete the march. Ten minutes before the end, our spirits were further raised by seeing Brandalism posters still up along the street. And we kept walking…for love. 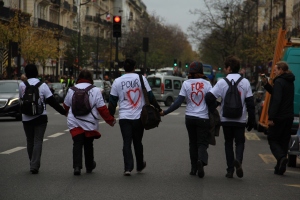