Where’s your red line? Is it when half the animals on earth have been killed? Is it when three quarters of the commercial fish stocks collapse?  Is it when the oceans acidify? Is it when only 15% of the world’s forests remain intact? Is it when record-breaking storms, fires, floods and droughts rage worldwide?

The closing ‘red lines’ protests against the COP21 climate deal had a message that the public would hold the global governments accountable and that they would have the last word. Governments have made a voluntary, non-binding agreement to begin to reduce emissions in 2020. Although negotiators agreed that warming should be limited to 1.5 degrees  and must be limited to 2 degrees there is currently no plan to make that happen. There are many times more reserves of fossil fuels than can be burnt and no governmental negotiations yet about who keeps what in the ground and who compensates who for climate change. So if we are to be responsible to each other and future generations how do we ‘keep it in the ground‘ and meet the COP21 target? 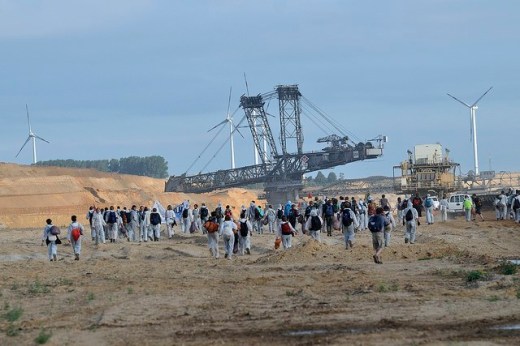 As well as divestment, community initiatives and political campaigns, internationally plans are growing for 2016 to be a year of direct action, interrupting fossil fuels at the sites of extraction. This year German coal mines were repeatedly shut down, including the Ende Gelande 1500 person mass tresspass which resulted in the hundreds arrested being released. In contrast, just nine people in the UK temporarily closed a coal mine owned by climate denier Matt Ridley and eight of the group have now been sentenced to a total of £10,000 in fines for which they are crowdfunding for help.

A UK project called ‘Groundswell‘ is now emerging to increase the interruption of fossil fuel extraction in 2016 but as more people step up and step forward in defense of their red lines, the question emerges, how do we prepare now to make our movement sustainable and strong for the coming storms?

December 12th’s ‘D12 Redlines’ mass mobilisations in Paris, were peaceful and from the outside this may appear to be good luck or an uncharacteristic kindness on the part of the police. I’d like to share with you the behind the scenes hard work of around 80 activists that lead to that peaceful protest and what we could learn from these techniques.

After the Paris attacks a major focus of the climate organisers of the D12 Redlines protest was to prevent further violence and trauma. An ‘action consensus’ was agreed and publicised that all those participating in the redlines action were agreeing to non-violence and non-escalation for that event, but simply stating it, does not make it so. Everyday the police would change the restrictions around protest meaning that day after day the plans would be redrawn. The largely muslim communities living around the conference center at Le Bourget were and are still suffering police repression and the decision was taken to move the protest elsewhere. Sometimes ten hour long meetings would be attended by activists from direct action groups and NGOs from around the world to decide the style, messaging and location of the civil disobedience. Eventually a commemoration of the climate dead and public commitment to defending the ecological ‘redlines’ was agreed.

On the day itself, there were around 60 people working on ‘de-escalating’ the police. Groups trained by Theater of the Oppressed had practiced emotional connection choreography kept themselves between the police and the crowd and kept the atmosphere one of peace through their hard work, even when the police started to get out the tear gas. Women dressed as climate angels kept a dignified solemnity and were prepared to resist police charges and tear gas. Some of my favourite memories were also from the clown groups. One pair of female clowns was blowing bubbles into each others face and then at the police. I saw one policeman restraining a smirk and dodging his head slightly so the bubbles did not burst on his face. 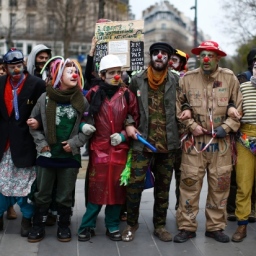 Another pair of clowns were following undercover police and identifying them to the crowd. The police looked very aggressive, were masked and wearing black. The clowns were mimicking and mocking them, pointing to them and telling people that they were police. After a time the police had no choice but to leave the crowd and their orange armbands saying ‘police’ were visible.

The day before, the police gave in to organiser demands and made the thousands participating in the protest around the Arc de Triomphe legal and therefore no longer civil disobedient. However, the need for participants and not just organisers to challenge the protest ban and make the conflict visible still existed, and without an outlet, violence may well have ensued. Groups led a push to march to the Eiffel Tower to join up with the legalised protests there, managing to block roads and take the space so that the crowd could march. One of the tools that helped keep the peace was the use of giant inflatable ‘cobblestones’ which were also simultaneously used in London and several other cities.

The inflatables bounced along the top of the crowd as they marched and made it quick to take a space without seeming threatening (although they would not have worked in windy weather).

At the Eiffel Tower I saw a military column of gendarmes (armed riot police) and you could see the crowd around becoming nervous. Then a troupe of clowns arrived and standing in front of the gendarmes, with their backs to them, began to pretend to be an incompetent military company, turning the wrong way, falling asleep and being disciplined. The crowd all turned to watch and the gendarmes quietly melted away. By clowning to the crowd, the performance was empowering without being directly confrontational to the police. An earlier clowning had included waving things in the police’s faces and more confrontational shaming which led to an escalation rather than de-escalation of tension. When choreographing emotions I think we need to be very careful how we use an emotion as powerful as shame, to avoid a defensive reaction of anger.

From what I saw in Paris there are good skills already around emotional choreography that we can use to combat increasing repression and state violence but there is an open playing field awaiting innovation. There is a great deal we can learn from resistance movements operating under dictatorships. How can we make the social cost to the state of violence against it’s people too high for them to want to pay? How can we use the moral high ground that we already hold to the best advantage?

It seems increasingly to me that the line between artist, performer and activist are blending and disappearing. Some of the finest hours in this field of work and the finest performers are perhaps yet to join the fray. The mainstream media does not have the space to examine this work so I salute and celebrate those performing the peace. Thank you for all the essential work that you did to keep us safe. I look forward to what you come up with next!