The format of how a group makes a decision has an effect on the decision that is made with different methods being more suitable for different situations. So what are a few of the different approaches we could use? 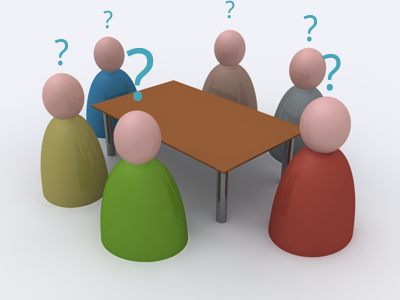 Factors which influence the choice of decision making include: urgency, importance, future lifespan of the group, personalities in the group, group size and expertise. In any group some people will have more personal power than others and this can be beneficial or harmful. It can be managed with a facilitator or by having leaders with the consent of the group.

Useful for urgent but not instant decisions. A leader has been appointed and the rest of the group give their ideas and proposals and the leader makes the final decision.

Simply picking a leader does not give them authority on the ground. If the group is not disciplined or practised in following that person’s authority, when it comes to the crunch they may simply make their own choice or follow someone else. This was seem on the D12 Paris demonstration when people followed someone they knew or someone highly visible rather than the person that had been designated.

Useful where urgent consent is wanted from all in a small group (less than ten). A few proposals are stated, then for each proposal on the count of three, everyone votes with their fingers. They vote on a scale from 0-5 – five fingers for agree completely, none for blocking the proposal. People feel pressurised to agree which can help get a quick decision but the bias is that the most dominant person will speak first with their proposal, so this is likely to be adopted. This is why it is important that several proposals are heard first, so that people know what their options are. The group decides in advance how many fingers is the minimum for consent depending upon the risks – three, four or five.

Used in democratic voting so most people are familiar with this. Suitable when less broad consent is needed because decisions do not infringe greatly on the minority. How you prepare and decide which proposals to vote on will determine a lot of the outcome.

Creation is most effective as individuals or small groups. Working groups are a useful model where a small number of people are given authority by the group to come up with proposals. These are then questioned and altered by the main group. The choice of people for the working group is obviously very important for their expertise and breadth of opinion. It is not advisable that everyone in a group should be ‘an expert’ as they will have a similar narrow worldview on the topic that could make the decision less robust.

For long term decisions as the process is time consuming. Can be used for large groups as long as the group has a shared purpose and a level of trust. Proposals best prepared by smaller working groups. Useful when decisions affect everyone and the power and personal choice of all people needs to be respected. Proposals are discussed and then voted on. Skilled facilitation is required to ensure that different voices are heard. Points are not repeated, if others agree with points raised, then they wave their hands/fingers. If anyone in the group feels the proposal is against the ethics of the group or would cause them to leave the group, they can ‘block’ it. If someone does not wish to be part of the proposal but is willing for it to happen, they can ‘stand aside’. If there are significant stand asides then the proposal should be discussed further.

Taking a step back and looking at how we make our decisions is essential for us to understand their influence on the outcome and to work with others. As the environment movement joins with equality movements we need to make group decisions with people who have different decision making cultures. Great social shifts are preceded by a coming together of previously unrelated social movements and now is one of those times in history. So when you’re in yet another meeting, with a room full of frustrated people struggling to work together, remember to decide how you decide, and to appreciate the wonder that these passionate people from diverse movements are finally coming together.

Attending the climate games award ceremony in Paris was not your standard awards do. What it was however, was undeniably cool. The awards were laser-cut stencils and spray paint, many of the award winners had to disguise themselves or send a delegate to collect the award. The hip band Filistine brought their wireless instruments down into the crowd. And throughout the night the crowd would break into chant. “Ah-A! Anti, anticapitalist-ah-A! Anti, anticapitalist-ah-A!” “What do we want? CLIMATE JUSTICE! When do we want it? NOW!”

Over 120 teams registered their actions in the climate games and the incredible array of team actions made it feel like a historic night to be a part of. Rather than individually acting to the mainstream media we played with each other and to the crowd. Hacking into the FM broadcaster on the Eiffel tower, replacing hundreds of advertising boards, storming a VW showroom dressed as animals, were all great winners. A highlight amongst the runner ups was the group that had the IPCC report printed onto 150 rolls of toilet paper and smuggled into the COP21 so that as delegates formed the inadequate agreement they were literally shitting on the science of the IPCC.

We are not fighting for nature. We are nature defending itself.

This week the 13 people who blocked Heathrow’s northern runway last July were found guilty of aggravated trespass and being airside without permission and the judge told them all to expect to receive prison sentences. Amongst those facing up to three months in prison are Buzz Tour’s Mel and Kara. 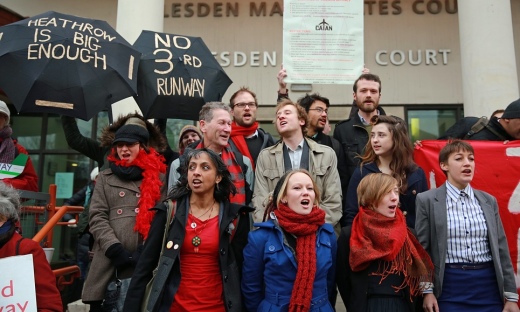 As their trial began last week, a solidarity demonstration of over 60 people including Green Party leader Natalie Bennett, was held outside Willesden court. With banners, giant inflatable cobble stones and solidarity songs we created “the best atmosphere at a court demo I’ve ever seen” according to one participant. The 30 seat public gallery at the court could not hold all those who wanted to observe. And as the guilty verdict was given on Monday people again gathered to show their support. But why am I telling you all this? Why does solidarity matter?

Building up your capabilities and overcoming your fears to take action is sometimes just the beginning. To know that your work is supported and that people will stand by you will make everything that comes next easier. After their arrest, the 13 have travelled back and forth to court, prepared their defence, been through the court system and been cross examined. If they are imprisoned they will become the UK’s first climate prisoners. But there will be many more over the coming years. With climate changing emissions still rising, direct action from the public (for example Groundswell) is also on the up, with increased numbers of people risking prison sentences.

If imprisoned for more than a few weeks you may be unable to maintain payments on your accommodation or fulfil your obligations to your job. As a result many people lose their home and job when they go to prison. Amongst the Heathrow 13 are a lawyer, a environmental scientist and an atmospheric physicist, who all risked their jobs to defend our future and life on this planet. Whether you send an email of support, write a letter to your newspaper, attend court, bake cake, donate money or offer work to those who lose jobs, the support of the environment movement is essential and deserved by those who take risks for the sake of us all.

The defence case was based on the premise that the 13 were defending life with their actions. The judge however refused to allow them to call expert witnesses on climate change, saying that she accepted the threat of climate change but that she did not accept that their actions were to save lives, and were instead symbolic.

As she gave her guilty verdict, the judge called the 13 “principled people”. History is made by principled people taking action. All it will take for a collapse of the ecosystems of this planet is for good people to do nothing. We live in an unprecedented generation of information and choice, where we can no longer avoid responsibility. Although the system we live within makes denial easy and action hard, we can take inspiration from those who do act, and we can give them our full support and solidarity when they do.

This fantastic article from Transition explores the causes and prevention of burnout to help us prevent it in others and ourselves. It can take years to recover from burnout so prevention is the only sustainable way. 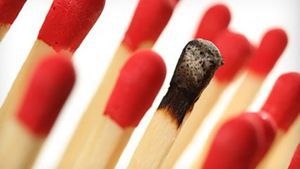