As I look back on 2015, human connections and growth are the two elements that come to my mind. I feel that we are riding a new wave of positive change and this wave is getting bigger and stronger, pulling more and more water into it. It is happening across cultures, across struggles and even across generations. 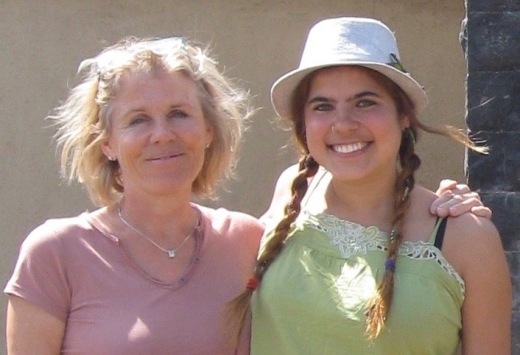 While I had been fed information about what life should be and how I should fit in it when I was a child, I then went through the turbulence of vomiting it all out as an adolescent, to finally find in my young adult years that I also had the possibility to feed.

Last spring, I revisited Palestine in solidarity with the population resisting the illegal Israeli occupation. This scared the people who loved me because the media bombards us with information that is selected and distorted. It dehumanizes populations and gives us the sense of being powerless to situations. It is always the unknown (or the “misknown”) and the feeling of powerlessness that respectively scares and prevents us from acting. So I asked if my mum would like to come and join me.

Sama suggested I join her in Palestine  – I thought of course I can’t – then 10 days later I was there! It was an extraordinary experience being in a country which I have only thought I would read about and being able to spend time with Sama following what she does. Roles were reversed and my daughter planned and directed the trip inspiring confidence and opening up to me a world of like minded people who are doing the things they believe in – fighting for equality.

A few months later, my mum joined a five-day cycle ride that I had co-organised. Heading to the climate negotiations in Paris, 125 of us were building a movement together to take action against climate injustice. On one of the days, we all took part in a mass consensus meeting to discuss how to react to the French state of emergency. On another, we were kettled on the Champs Elysée by riot cops. On the last day, we swarmed the streets of Paris with our bikes, surrounded by anti-capitalist chants and then danced under the Eiffel Tower.

I am so encouraged by grass roots activism and proud of Sama for her involvement.

Activism is a form of global breathing. If we are not active we are letting everything around us die. The more we are to breath, to be active, the more we are keeping this planet alive and staying connected on human level. Our identity in activism is defined by what we chose to focus on and the methods we use to go forward. For this reason, it is crucial for me to share it with the people around me, and most importantly, those who brought me into this world.

It has been an honour to have my mum come on board with some projects I was involved with. Not only did I feel understood and notice a balancing out of our relationship, but also felt I had built an ally in my fights.

None of the learning-teaching stages ever actually end. I am still learning from the elders, still battling to define what my own beliefs are and will still have something to offer back. It is this realization, which happened through practice, of the importance of intergenerational cooperation that has been one of my biggest learnings and joys of 2015. It may not be as simple and beautiful as it was for me to invite your mum to your next protest, but you don’t ask, you don’t get. Balancing out our family relationships can only help grow our solidarity in the world.

One thought on “Sama: I invited my mum to a protest”